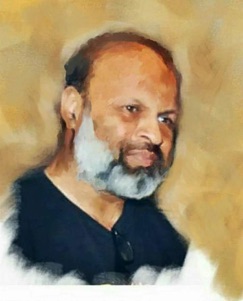 With over 40 years of experience in modern and contemporary art, M. A. Hussain is celebrated as a prominent artist of Udaipur, Rajasthan.

“CONSISTENCY & DIVERSITY are the two most important aspects of an Artist’s work” – M. A. Hussain.

He is making original art for more than 40 years and this experience can be seen in his work as well. The canvas speak itself when he draw something on it. His painting is a master piece combination of spirituality and emotions. The variety of artwork that can be seen in Mr. Hussain’s painting is amazing and his single artwork can be explained in as many different ways as possible. M.A. Hussain has become a brand name for his signature paintings and has highly appreciated by top critics as well. He is a MAN of passion, commitment and focus for his creations and he love to draw different aspects of life, emotions, spirituality, love, energy, cosmic power, calligraphy etc. on his canvas.

M. A. hussain is among the few artists who create paintings on regular basis and not once in a while. The perfection in original arts/paintings can be seen on his canvas as well. He can paint anything and on any topic. Calligraphy artwork of Mr. M. A. Hussain is also on high demand, mostly in gulf countries like Dubai, UAE. He usually draw large life size calligraphy paintings on big canvas. Customize paintings on canvas is also created by Mr. Hussain and some of the biggest customized paintings are created by him.

Being one of the artists who is expert in creating large sized painting, he never stopped making small canvas paintings as well. As he usually says, if you can draw 7 horses painting on 300 sq. ft. canvas than you can paint the same on a A4 size canvas as well. M. A. Hussain not only create big paintings but also he is surprisingly fast painter. He finishes a 100 sq. ft. canvas painting in a day time, and that’s on a normal day of work. He has created more than 4500 paintings so far and too with variations and on different topics.

People close to his usually says that he has a GOD Gifted talent in Painting and Original Artwork and he is blessed by the Supreme Power himself to create such an astonishing and power driven artwork on canvas.